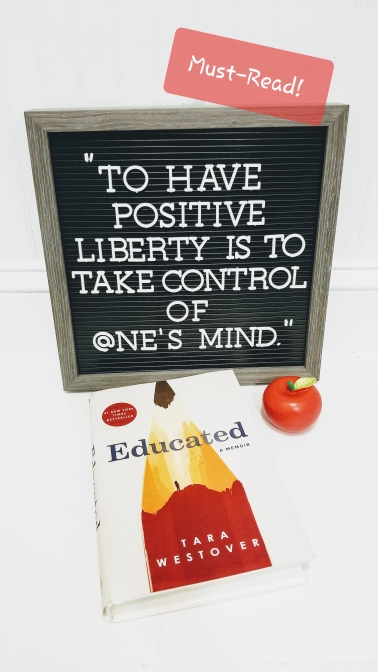 Tara Westover has never set foot in a classroom until the age of 17. And today, she’s Dr. Westover.

Born into a family whose head of the household believed that “public school was a ploy by the Government to lead children away from God,” and distrusted the Medical Establishment (she had no medical records because she was born at home), whose wife gave in to all his whims, fancies and fanatical beliefs, his children all brainwashed to thinking the entire world is against them and God, and the only righteous person is him and God, Tara had indeed led a challenging childhood.

Bullied, tormented, abused, and unloved by most of her family members, Tara was left to fight her mental and spiritual demons almost entirely alone. Her fight and struggle were so extreme, they were almost unbelievable, even to herself, despite after re-reading her journal entries.

But her unquenchable thirst for knowledge saved her. Education reinvented her. Her willpower propelled her. This is a story of triumph over adversity.

This book gave me all kinds of emotions. I laughed, cried, winced, gasped, threw my hands in the air, pulled my hair, buried my head in the book, stared into space,  and quietly screamed WTF numerous times.

I wondered many times, what would I do if I were Tara? What would become of me if I had to live in an extremely abusive environment – a ‘mainstream’ Mormon father who constantly belittled her and reminded her of her duty as a woman is to do wifely work; a brother who physically abused and insulted her (calling her ‘nigger’ and ‘whore’, just to name some), a mother who didn’t protect and love her as she should.

Her self-doubt was a battle she had to fight constantly. She even tried convincing herself that she was insane for thinking so negatively of her family. And any help that came along the way were rejected because it’s her problem, she alone can fix it. There’s nothing wrong with her family; it’s her that needed fixing. Her father’s words were so strongly ingrained in her that disbelieving him would be an act of betrayal. And one doesn’t betray family.

With the countless mental breakdown that she went through, and the psychological warfare that her family put her through (her dad and brother Shawn* especially), I doubt I would’ve survived her world. I would’ve surrendered; just like her sister did. Speaking of which, even her sister betrayed her! Even after all that, she returned to them. Again. And again. (This somehow reminded me of Stockholm Syndrome. I’m no psychologist, so I’m not sure. But it somehow reminded me of that.)

Written with such honesty and openness, this memoir was a difficult one for me to read. Even the ‘Acknowledgments’ section brought me to tears.

*A pseudonym she gave her brother

“First find out what you are capable of, then decide who you are.”

“The thing about having a mental breakdown is that no matter how obvious it is that you’re having one, it is somehow not obvious to you.”

“The most powerful determinant of who you are is inside you.”

“Emancipate yourselves from mental slavery

None but ourselves can free our minds.”

My take-away message: The mind is a very powerful tool. Change your perspective, and it’ll change your world. Reinvent yourself. READ. Get educated.

Till then, HAPPY READING!