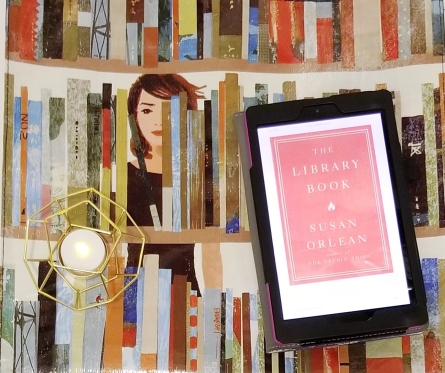 On the morning of April 29, 1986, a fire alarm sounded in the LA Public Library. The fire burned for more than 7 hours, engulfing the library in its ferocity. By the time it was extinguished, it had consumed 400,000 books and damaged 700,000 more. Investigations have been done, but 30 years later, it still remained a mystery. We still don’t know if someone set the library on fire. If so, who? Why?

I read this book with no expectations, because I don’t see how much can be written about libraries, let alone one library. But I was curious. And being a lover of books and libraries, I had had to read it, and I didn’t regret it! This book was an eye-opener.

Non-fiction books filled with research and findings can sometimes make a tedious read. But not The Library Book. Not only was Orlean’s research thorough, her narration was insightful and compelling.

I was blown away by the stories the library stored within those walls, books and shelves – from its architecture (which a writer described as being “as frank and open and honest as the eye of a little child”), to the history and the people who worked there, and treated it like their second home. It’s almost hard to believe they’re true.

Within its pages, I met the efficient and formidable Mary Foy, who was only 18 when she was hired,  the unconventional Kelso, who modernized the library and abolished the membership fee (it was $5 per year), the reckless journalist, Charles Lummis, who hired a blacksmith to make a poison warning symbol to brand the frontispiece of offending books, Dr. C.J.K. Jones, a pastor, a citrus farmer, known as “The Human Encyclopedia” who roamed the library dispensing information, or a staff librarian, Tina Princenthal, who was sometimes asked the most bizarre questions one would ask a librarian, like how to sign a card for a baby shower or if it was okay to eat a can of beans that didn’t have an expiration date. I mean…???????!

And what’s a library without its patrons. Libraries provide so much more than just books. For example, the LA Public Library:

My only gripe though, was the suspected arsonist, Harry Peak’s story. His was an interesting one, but the jumping back and forth of his story, made it hard to follow at times.

This book made me an even bigger fan of libraries and librarians.

A must-read for all lovers of books and libraries!

Have you read the book? What did you think of it?

Thank you Netgalley and Simon & Schuster for an eARC of this book in exchange for an honest review.

*Quotes included here are from an advanced readers copy and are subject to change upon final publication.