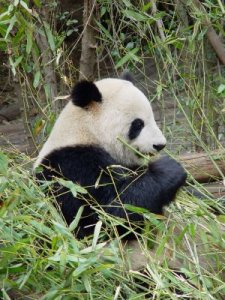 Read this from a link on my bf’s blog (bennykhoo.com). Very interesting….

The recent death of Ling-Ling, the only giant panda owned by Japan, sent the world into mourning. Everything about these giant teddy bears—their squat, furry bodies, their sad black eyes, their especially vulnerable babies (often compared to sticks of butter)—makes them ridiculously, scientifically cute. This, along with their dire status as a species, makes them a powerful symbol for the conservation movement as a whole.

But there’s another side of the panda’s tale. Pandas have been ridiculed for their decidedly non-bearlike vegetarian diets, their apparent lack of interest in—and aptitude for—sex, their tendency to spend the majority of their time sitting, eating, scratching (video), and defecating (about 40 times per day)—even for being, shall we say, plump. These rather “unfit” characteristics have made the giant panda a favorite animal of creationists, who argue that the panda’s survival proves the existence of God. How is it, they ask, that such a species could have “evolved” to be so poorly suited for survival and could have lasted these “alleged” tens of thousands of years without a little help from a higher power?

Vegetarians
One of the panda’s curious adaptations is its remarkably inefficient diet. Like other bears, and like omnivores and carnivores, pandas have short digestive systems, making them ill suited for their preferred diet of fibrous, nutrient-poor bamboo. To obtain sufficient nutrients, pandas must eat almost a fourth of their weight in bamboo every day. Pandas also favor young bamboo sprouts, which have even less nutrition; if they eat only these, they must chomp down almost half of their weight daily.