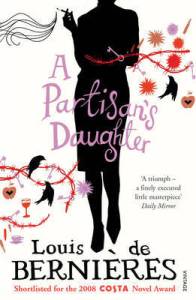 Louis de Bernieres is well-known for his previous works like Birds with Wings and Captain Corelli’s Mandolin. Unlike those two, his latest, A Partisan’s Daughter, is somewhat different; it’s simpler, shorter, and sublimely funny. But this story, like his previous ones, still grips your heart, and its words will still linger in your mind after putting it down. The theme of the story revolves around love, regret and seizing life’s moments.

This story is set in London, in the 1970’s. It is about a man in his 40’s named Chris, who’s unhappily married to his wife whom he calls, a Great White Loaf. One night, as he was roaming in London, a scantily clad lady standing in the streets, catches his eyes. He asks her very subtly if she’s a prostitute. This is totally something new to him as he is “not the sort of man who goes to prostitutes.” When she finds out his intentions, she tells him she isn’t a prostitute, but would appreciate it if he could give her a ride home. To thank him, the lady, Roza who’s in her 20s, invites him to come to her place for coffee whenever he’s free. He takes up her offer.

Over the next few months, Roza tells Chris the stories of her past. Gradually, Chris begins to long to see her more and drops by her house more frequently. He starts questioning himself if he is indeed falling for her or merely wanting her company, hoping that she’d sleep with him one day (as he’s still saving up that 500 pounds, an amount which she’d sell herself). The loquacious Roza on the other hand, isn’t sure if she’s attracted to Chris because he made her feel important by just listening to her and her stories, or because she really loved Chris.

The story alternates between Chris and Roza as narrators, which allows you emphatise with their character and thoughts.

Great for a weekend read. Can’t figure out any food or drinks to go with it tho’ haaha