Truth to be told. If it wasn’t sold at RM8, I wouldn’t have purchased it, ‘coz it’s only 166 pages and I ain’t paying RM30 odd ringgit (the average cost of a book here in Malaysia) for a book that thin 😛 Here’s the embarrassing part. This book is faaantastic. If I’d known, I wouldn’t mind buying it at its original price (but the cheaper the better of coz :P). 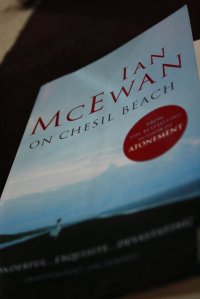 On Chesil Beach is mainly about love and loss. The story is set in 1962 and is about a newly married couple, Edward and Florence, who decided to tie the knot, because they were in love with each other and thought it was only right to do so. The problem was, they hardly knew or understood each other, hence they were unable to express themselves openly, about sex especially. See, Edward wanted sex, Florence clearly didn’t.

McEwan’s ability to capture the characters’ emotions and thoughts, was flawless. There were parts I cried, for I felt Florence’s sadness and bitterness when she supressed her own feelings just to prove to Edward (and herself) that she loves him. At times, I couldn’t help hating Edward’s selfishness, as all he thought of, was having sex with Florence. Edward: When he heard her moan, Edward knew that his happiness was almost complete.

He was also able to describe the newlyweds’ first night together at a hotel in Chesil Beach, after their wedding, so gently yet so exact; so poetically, yet so real, so raw, so tender…. Look at how beautiful this was written: She was doing all she could prevent a muscle in her from tightening, but it was happening without her, of its own accord, as inevitable and powerful as a sneeze. It was not painful as it clenched and went into mild spasm, this treacherous band of muscle, but she felt it was letting her down, giving the first indication of the extent of her problem. (page 85)

Reading this novella made me question the meaning of love and marriage. Is it about your happiness or your partner’s? Was Edward to be blamed for the outcome of their marriage? Or was it purely Florence’s fault? Were they both being selfish? Did they love each other at all in the first place?

One thing that left me somewhat unsatisfied though. The last part of the story felt like it was rushed through, and lacked McEwan’s powerful narration. Wonder why… It was quite an anti climax 😦

Nevertheless, this is one of the many books which I’d read again. And I will.