Skip to content
Two bookaholics recommended me this trilogy. Coincidentally, MPH was having a warehouse sales at the time of which I was on a hunt for it. As luck would have it, I found the trilogy at the warehouse sales, sold at RM25 each 🙂 Thence, began my journey with Bartimaeus. 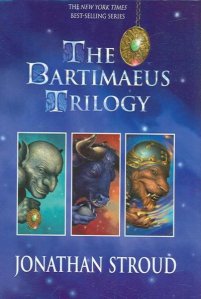 Here’s a peek into what this trilogy is all about:
The story is told through Bartimaeus, Nathaniel and Kitty. It’s set based on certain true events and people (like the American Revolution and William Gladstone), during a time when magicians governs Britain and the commoners (the non magicians) made up the rest of the society.
The Amulet of Samarkand mainly revolves around the rise and fall of London, and the introduction of the main characters – Nathaniel (John Mandrake, his magician name) who has a strong desire to be a great magician who wanted to be part of the government body, Bartimaeus (the first djinni he summoned at the tender age of 12) and Kitty, a commoner who was a member of a group called The Resistance.
The second installment, The Golem’s Eye, we’d learn more about Kitty and what drove her to be part of the Resistance. In this 2nd book, Nathaniel, who was now member of the government, was sent out to crush the Resistance, capture the members and at the same time uncover the mysterious golem which caused chaos in the city, and once again, Bartimeaus was summoned to help him out.
Ptolemy’s Gate brings the whole trilogy to a full circle, where djinni, magician and commoner come together for a common good – to save the government from being overthrown.
To note: I love Bartimaeus to death. This 5000 year old djinni is hilarious, sarcastic, witty, blunt, cheeky, intelligent and so full of himself! I loved him so much so that I got jealous of Kitty whom he grew a certain liking to (yeah, I am weird 😛 So what!) He speaks in footnotes too! Hilarious, this fella. I laughed so loud when reading his thoughts and sardonic comments my hubby thought I was losing it!
Now that I’m done with the trilogy, I’m missing Bartimaeus by the day. Once in awhile, I’d just leaf through the pages, and read some of his footnotes, just to keep him close to my heart 🙂 haha
*Image from: http://www.fairrosa.info/rj/uploaded_images/barticover-732702.jpg