In a nutshell
The title of the book explains itself. Unlike other books that are of a similar kind, this one’s filled with simple lessons conveyed in a very straightforward manner, that you could finish it in one read. Watanabe teaches you how to analyse your problems, make decisions and live a more proactive life using helpful problem-solving tools. In the beginning, he identifies some common characters among most people – Miss Sigh, Mr. Go-Getter, Mr. Critic and Miss Dreamer, who aren’t problem-solvers and very often end up not achieving their goals, or taking a longer route in achieving them. Then, he explains what it takes to be a good problem-solver and what exactly is problem solving.

What I liked
The simplicity of his explanation and the use of fantastic illustrations and tables to convey his message and ideas. He uses 3 different simple scenarios to explain his problem-solving techniques.

1) The Mushroom Lovers: How its band members, Miss Mushroom, Eggplant and Tofu (love them! hehe) face problems in increasing their concert attendance; 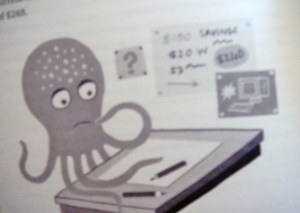 2) John Octopus: He wants to become an animator and a Hollywood movie director, but is clueless about computer-generated animation and doesn’t even own a computer.

3) Kiwi: She’s an aspiring football player who wants to move to Brazil to train and to be a world-class player. Her parents agree to allow her to pursue her dreams only if she promises to balance football with school work and she must pick a school where the tuition fees is less than $3000 per year. 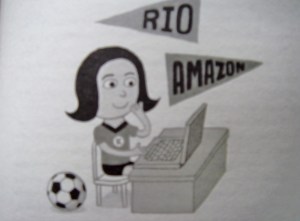 Throughout the stories, we’ll learn how all of them, who have different dreams in life, overcome their problems and ultimately achieve their goals as planned.

What I learnt
I confess that whenever I’m faced with a big problem, I’d try it once, twice, thrice and then, take the easy way out – forget it. Yeah…you can say it to my face, “LOSER!” 😛 And I never really bothered to read books on problem-solving. I browsed the pages, yes, but it always looks so complicated, boring and tedious with all the tables, diagrams, jargons, and endless scenarios.

But this book did make me ask myself, is problem-solving really that easy? Like all other problem-solution methods, it involves these steps: 1. Realize there is a problem. 2. Identify the root cause. 3. Develop an action plan. 4. Execute and tweak until the problem is solved. Same-o-same-o, I thought at first, until I saw how he presented his answers in simple tables, charts, the hypothesis pyramid, and yes/no and logic trees. He made problem-solving look and sound so simple, that it got me interested. But I can tell you, as far as I’m concerned, it’s not as easy as it looked. The execution part would take time. But I figured, rather than ending up being a complete failure, why not take some time, learn to use those tools, and make things happen, right?

So, now. Let me attempt my very first BIG problem.