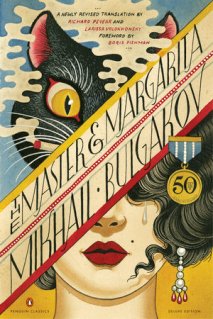 Title: The Master & Margarita
Author: Mikhail Bulgakov
My verdict: 5 stars
Highly recommended!
In a nutshell:
This classic was written during Stalin’s regime and was banned until many years after Bulgakov’s death. The Master and Margarita (TMM) alternates between 2 settings – Moscow in the 1930’s and Jerusalem; and it’s divided to 2 parts.

Woland (Satan) and his motley crew of 4 (Koroviev, Behemoth, Azazello, Hella) appeared on earth (in this case, in Russia), and brought people whom, in his eyes, have sinned, to justice by punishing them, some to death (in the most gruesome way one could imagine.. *cue intensifying sound effect!), and at the same time gave peace to two lovers – the Master and Margarita. And Margarita, knowing Woland is Satan, worshipped him, for he brought the master back to her and reunited them.

This novel also brings us back to 2000 years ago, in Yershalaim (Jerusalem), where and when Yeshua Ha-Notsri (Jesus) was crucified under Pilate. Pilate’s conscience crept onto him as he contemplated on whether he had done the right thing. He tried to ease it by attempting a plan to kill Judas, who was paid a large sum of money by the high priest to betray Jesus.

In Part 2, we meet Margarita. Stuck in a loveless marriage, she sought ways to get out of it to be with her new-found love, the Master. When her husband left for a business trip for 3 days, and she had the whole house to herself, all her broke loose. Literally. She sold her soul to satan (because she thought she had lost the Master and felt there was nothing else to live for), transformed into a witch, felt utterly free, met Woland, became the hostess of his ball, all at her own will. When Woland asked her what she wanted in return, she told him of her intentions to be reunited with her true love, the Master. Her wish was granted.

What I enjoyed:
Woland’s retinue! Especially the boisterous Koroviev (sometimes referred to as Fagott), who’s usually dressed in his checkered attire, and Behemoth, the garrulous cat-like demon the size of a jog. The two, as evil and conniving as they are, make such an absurd yet amusing duo!

I also loved how Margarita was depicted as a strong and bold heroine, instead of your typical damsel-in-distress. Although in despair, she held strong to herself and was never afraid to speak her mind, even when meeting Koroviev for the first time. And she maintained her calmness amidst the chaos that were happening around her and embraced her new life as her witch. What made me love her even more is the kindness she showed her maid, Natasha, throughout the novel.

What I didn’t like:
The ending. Won’t say more as it’ll contain spoilers.

Also, I found it hard to keep up with the numerous important characters in the story due to their names (and they’re sometimes referred to with a different name!). If you plan to read TMM, take note of most of them as they’re important as the story progresses.

Some of my favorite quotes:
. When Berlioz (the editor of a journal) and the poet were having an argument on the existence of God, Woland (Satan) ‘happened’ to be listening in. He said this, “But what troubles me is this,” “if there is no God, then, you might ask, who governs the life of men and, generally, the entire situation here on earth?”
. When Matthew Levi (former tax collector) met Woland, Woland said this to him: “You pronounced your words as if you don’t acknowledge the shadows, or the evil either. Would you be so kind as to give a little thought to the question of what your good would be doing if evil did not exist, and how the earth would look if the shadows were to disappear from it?”
Fun Facts:
. Before choosing ‘The Master and Margarita’ as the title, some of Bulgakov’s initial ideas were ‘An engineer’s hoof’, ‘A joggler with a hoof’ and ‘Woland’s guest performances’. The novel got the title it is known only in 1937, according to the journals of Bulgakov’s wife, Elena Shilovskaya. (theculturetrip.com)
. Until today, nobody knows if tram line at the Partriach’s Pond (a park in the center of Moscow) where Berlioz was killed, really did exist. Researchers have tried to trace the line’s existence to no avail. (theculturetrip.com)
. TMM is also one of Daniel Radcliffe’s favorite reads!