Title: The Great Believers by Rebecca Makkai
Publisher:
My verdict: 3.8/5
In a nutshell:
The Great Believers was set in two places – Chicago and Paris, portraying a group of gay friends, mainly focussing on Yale (whom I love and could relate to when he spoke of his childhood) living through the AIDS epidemic in Chicago in the 80’s; and Fiona in search of her daughter, Claire, in Paris year 2015. These stories moved back and forth throughout the book.
What I liked:
I cried myself to sleep the night I finished The Great Believers. It’s a story of loss, love and redemption. I was especially drawn to the story that shed light on the challenges of American gay men living with AIDS in the late 80’s and early 90’s, and how ignorance had caused thousands of lives.
I felt their heartbreaks and devastating loss of their loved ones and their own lives to AIDS, especially Fiona. She gave, and gave, and gave, and lost. And the ending was a tear jerker. I never thought I’d tear up.
What I didn’t quite like:
One thing though, I don’t see the connection of Yale’s art deal to the rest of the story. I just didn’t get it. Was it necessary? I felt like it dragged the whole story. And the number of minor/secondary characters that appeared on and off sometimes made me lose track of the story.
But the ending made my patience and perseverance worthwhile.
What I learned:
The level of ignorance of the AIDS epidemic then (hopefully not now) is appalling! Here, a snippet of an interview between journalist Lester Kinsolving and Ronald Reagen’s press secretary, Larry Speakes.
“Lester Kinsolving: Does the president have any reaction to the announcement by the Centers for Disease Control in Atlanta that AIDS is now an epidemic in over 600 cases?
Larry Speakes: AIDS? I haven’t got anything on it.
Lester Kinsolving: Over a third of them have died. It’s known as “gay plague.” [Press pool laughter.] No, it is. It’s a pretty serious thing. One in every three people that get this have died. And I wonder if the president was aware of this.
Larry Speakes: I don’t have it. [Press pool laughter.] Do you?”
It was taken ever so lightly, and they thought AIDS was only exclusive to gay people, and that it can be transmitted through saliva. WOW.
Read the entire interview here:https://www.vox.com/2015/12/1/9828348/ronald-reagan-hiv-aids
If that isn’t appalling, I don’t know what is.
Have we progressed and improved? Here’s a chart to show our progress if you’re interested:
Source:https://www.webmd.com/hiv-aids/the-fight-against-aids-then-and-now 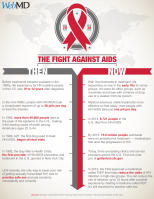