It’s Wednesday and it’s time for…. WWW Wednesday! Hosted on Taking On A World of Words.

Synopsis (Amazon): In this entrancing novel “that speaks to the Marilyn Monroe and Elizabeth Taylor in us all” (Kirkus Reviews), a legendary film actress reflects on her relentless rise to the top and the risks she took, the loves she lost, and the long-held secrets the public could never imagine.

Aging and reclusive Hollywood movie icon Evelyn Hugo is finally ready to tell the truth about her glamorous and scandalous life. But when she chooses unknown magazine reporter Monique Grant for the job, no one is more astounded than Monique herself. Why her? Why now?

Monique is not exactly on top of the world. Her husband has left her, and her professional life is going nowhere. Regardless of why Evelyn has selected her to write her biography, Monique is determined to use this opportunity to jumpstart her career.

Review up this Friday!

Something In The Water: A Novel by Catherine Steadman

Synopsis (Cover): If you could make one simple choice that would change your life forever, would you?

Erin is a documentary filmmaker on the brink of a professional breakthrough, Mark a handsome investment banker with big plans. Passionately in love, they embark on a dream honeymoon to the tropical island of Bora Bora, where they enjoy the sun, the sand, and each other. Then, while scuba diving in the crystal blue sea, they find something in the water. . . .

Could the life of your dreams be the stuff of nightmares?

Suddenly the newlyweds must make a dangerous choice: to speak out or to protect their secret. After all, if no one else knows, who would be hurt? Their decision will trigger a devastating chain of events. . . .

Have you ever wondered how long it takes to dig a grave? 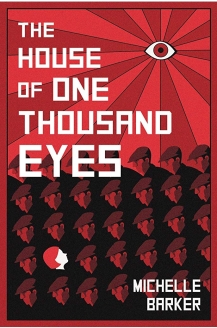 The House of One Thousand Eyes by Michelle Barker

Synopsis (Amazon): Life in East Germany in the early 1980s is not easy for most people, but for Lena, it’s particularly hard. After the death of her parents in a factory explosion and time spent in a psychiatric hospital recovering from the trauma, she is sent to live with her stern aunt, a devoted member of the ruling Communist Party. Visits with her beloved Uncle Erich, a best-selling author, are her only respite.

This searing novel about defiance, courage, and determination takes readers into the chilling world of a society ruled by autocratic despots, where nothing is what it seems.

One of my goals is to read one or two non-fiction in October and a couple of short story collections (hopefully!)

I’m from Malaysia, so naturally, Billion Dollar Whale (Soon to be made into a movie!!)  got my attention:

Synopsis (Amazon): In 2009, with the dust yet to settle on the financial crisis, a mild-mannered Wharton grad set in motion a fraud of unprecedented gall and magnitude–one that would come to symbolize the next great threat to the global financial system. The scandal is known as 1MDB, and the man behind it, Jho Low, is a figure so preposterous he might seem made up.

“An epic tale of white-collar crime on a global scale” (Publishers Weekly, starred review), Billion Dollar Whale reveals how this young social climber pulled off one of the biggest heists in history. Over a half decade, Low siphoned billions from an investment fund–right under the nose of the global financial industry. Low used the money to finance elections, purchase luxury real estate, throw champagne-drenched parties, and even to finance Hollywood films like The Wolf of Wall Street.

Federal agents who helped unravel Bernie Madoff’s Ponzi scheme say the 1MDB affair will become the textbook case of financial fraud in the modern age–and its fallout is already being credited for taking down the prime minister of Malaysia. With his yacht and private jet reportedly seized by authorities and facing money-laundering charges in Malaysia, an Interpol red notice, and an ongoing U.S. Department of Justice Investigation, Low has become an international fugitive.

Soon to be made into a movie and produced by non other than Michelle Yeoh!

What are your WWWs? I’d love to know! Post them in the comments or just attach your link 🙂