Now, who says ugly isn’t beautiful? Check out what I found! (This post is pretty long, but please read, especially if you think you’re ‘ugly’. It’s really enlightening :))

Confucius once said, “Everyone has beauty, but not everyone sees it.”

Leave it to the owner of a company called Ugly New York to have the eye of the beholder. “I think people are really ready to start seeing a whole different kind of person out there,” Simon Rogers, the agency’s head, told TODAY’s Al Roker Friday.

The Ugly Talent Agency opened in London 39 years ago, but only opened up a New York office last summer. And business is … beautiful.

Ugly New York’s mission: To find the look of someone who is anything but outright pretty. There are safe words to describe the look; it could be “real” or “eccentric.” But certainly, “tall,” “short,” “fat,” “thin” and, well, “ugly” also fit.

Anyone who evokes a certain character or charm that breaks the mold, who could potentially be used in a movie, television show or print ad, is what Rogers is looking for.

“We’re in New York,” added Rogers, himself a rather dapper Brit. “So it’s very easy for us just to walk out of a front door, and quite often we street-cast.”

An ‘ugly’ trend
Of course, casting people who may be heavily tattooed, no longer young, or overweight isn’t exactly a new idea. The Ugly Agency began in England in 1969 simply because two British fashion photographers noticed a lack of “unusual looks.” Today the agency represents more than 1,000 models of all shapes, sizes, cheekbone structures, tooth tallies and piercings. 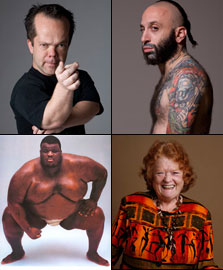 Other pictures of these unique individuals!
http://www.nypost.com/seven/12022007/news/regionalnews/ugly_people_are_models_too_148122.htm

And even in an American popular culture consumed with youth and beauty, there is recognition of the need for something different — something that incorporates the real-life charm of characters in more spontaneous media like YouTube and MySpace. So much so, in fact, that Ugly New York is quickly gaining on its home office: Its core representation in the Big Apple is now 500 models.

“It’s an incredible melting pot,” Rogers said. “So we now represent a really candid cross section of what America is.”

On average, an Ugly model can pull down anywhere from $200 to $600 per booking for a print ad, with castings in television shows and movies a much wider-ranging compensation. But in addition to the monetary benefits, the atypical models seem to enjoy the wealth of prestige they get in telling disbelievers that they are, yes, models.

“For me, being a little person, I never thought that I could be a model because you think of a model being 6 feet tall, skinny and beautiful,” actress/model Jordanna James told Roker. “And I’m only 3-11. So once I found out that I could say, ‘Yeah, I’m a model,’ I’m like, ‘Yeah! That’s really cool.’

“For me, they just look at me and say, ‘Yeah, right, yeah sure,’ ” put in the jowly Asher Suss when asked about the reaction he gets when he identifies himself as an actor and model.

Perhaps just as surprising is the manner in which Rogers approaches a potential Ugly face.

The pitch
Roker and Rogers did a little on-camera scouting for talent in a New York park and happened upon a portly, mustachioed gentleman on a bench who might have passed for Wilford Brimley’s brother.

Rogers demonstrated his approach: “My name is Simon,” he said simply, putting out his hand. “I own a talent agency right around the corner, and we represent a lot of interesting people — all shapes and sizes. And honestly, I think you’d be great for us. So let me give you a card, here.”

Rogers’ prospect, whose name was Noel Poddell, seemed happy for the interest. Asked Roker: “So it wouldn’t offend you to be represented by an agency called Ugly in New York?”

After just a moment’s hesitation, the husky Poddell responded: “I’ve been called worse.”

Brian Thomas, an extra-heavy-set Ugly model, joked that he already knew he was model material before the agency took him on. “Well, I’m hot,” Thomas said. “Let’s just get that right out in the open. I’m drop-dead sexy.“

But seriously?
“My sister actually sent my pictures in to Simon and when Simon called, I thought it was a prank call,” Thomas explained. “I thought it was my buddies at work fooling around. But it’s been a great ride. I’ve been having a blast ever since.”

Rogers actually goes on model searches quite often, particularly on subway trains, and doesn’t find too many offended parties. But describing what he’s looking for doesn’t come quite as easily.
“The truth is, it’s just a gut feeling,” Rogers told Roker. “Some people just have that something special. For me, the basic thing is they’ve got to be happy with themselves.

“They have to be content with who they are because after all, they’re going to be out there in front of the camera.”