Skip to content
I’m a sucker for children’s books; anything for ages 0 – 10; especially those written by Roald Dahl, Dr. Seuss, Julia Donaldson and Eric Carle. I normally pick books which are:

Recently, I came across this article which listed 10 children’s books and I was flabbergasted. Were these books REALLY MEANT FOR CHILDREN??? I won’t ever read these books to kids. Would you or allow your kids to?

First, the title itself turned me off. Suck-a-thumb, and the illustrations seemed to aim at giving children nightmares…Definitely not something I wanna read to my children…

Ghastly, ghostly, gory…A HUMAN HEAD-SWALLOWING HEAD???! Is this Nightmare on Elm Street?? And check out its title…I dare not imagine what’s in their ABCs

This one looks innocent enough. That little red thing on the left looked like a carved out potato to me,..but…after reading its description…that seemingly innocent-looking potato is actually the head of Mr. Buckingham, who had been dismembered!! — losing one foot to a buzzsaw and another to a fish before his arm is sliced off by a gardener and he gets hit by a truck — as he tries to prove to little Billy that it won’t hurt to pull on his loose front tooth. That’s him there, just a head left.
I imagine this conversation between a dad and his son:
“No, daddy! I don’t wanna pull out my loose front tooth!”
“Hey son…there’s nothing to worry about…Look at Mr. Buckingham! He’s left with only his head, and he’s still smiling!”

The title of this book is Poor Cock Robin. I mean, REALLY??? It sounds so wrong whichever way I read it.
Poor, Cock, Robin
Poor, Cock Robin
Poor Cock, Robin
Even if I read it flatly Poor Cock Robin
And what’s it about?
circa 1865, the sparrow kills Cock Robin and then all the other terrifying creatures of the forest talk about how they’ll bury him. An excerpt: “Who saw him die? I, said the Fly, with my little eye, I saw him die. Who caught his blood? I, said the Fish, with my little dish, I caught his blood.”

This, my friends, were how the Russians taught their children the important lessons on life:

“You like to fight with your fellow-friends? Then you’ll be bitten by different snakes!” and “If you plan not to listen to father wild black cats would scratch your brother” and “If you are greedy as old and don’t share balls probably you would be eaten by wolves.”
I think I’d stick to, “If you don’t do your homework, I’ll call the police to come get you.” That itself, scared me to death when I was a kid. 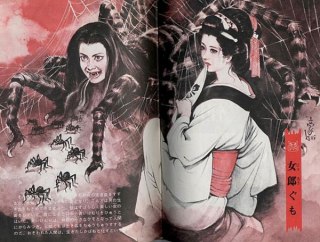 Yes, this is a CHILDREN’S BOOK. JorÅgumo (which is literally translated as “whore spider”), from Gojin Ishihara’s 1972 children’s book Illustrated Book of Japanese Monsters.
Click here for the complete article.