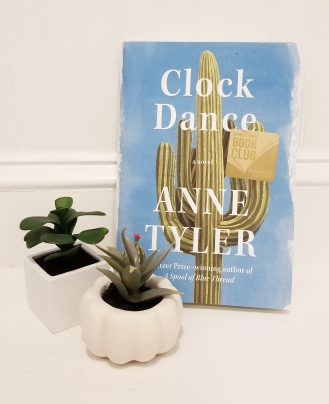 In 1967, she is a schoolgirl coping with her mother’s sudden disappearance. In 1977, she is a college coed considering a marriage proposal. In 1997, she is a young widow trying to piece her life back together. And in 2017, she yearns to be a grandmother but isn’t sure she ever will be. Then, one day, Willa receives a startling phone call from a stranger.

Without fully understanding why, she flies across the country to Baltimore to look after a young woman she’s never met, her nine-year-old daughter, and their dog, Airplane. This impulsive decision will lead Willa into uncharted territory–surrounded by eccentric neighbors who treat each other like family, she finds solace and fulfillment in unexpected places.

This is my first Anne Tyler book. For me, it was a refreshing, new kind of read, a total opposite from what I’d usually pick up.

My favorite part of Willa’s story was when she decided to fly to Baltimore to look after Denise, who was shot in the leg, Denise’s daughter, Cheryl, and their dog, Airplane, who all lived in a “bare bones kind of house”. It was here, in this little town, that Willa felt a sense of purpose – what it felt like to be needed and useful. Although foreign to her, she learned her way around this little town, met with fascinating characters that she never would have in her previous mundane golfer-wife life.

They were the everyday people you meet or know –  a friend, family member, or neighbor; your average Joe. But Anne gave them qualities that made them relatable, that you can’t help but to enjoy their company. To name some – Ben the neighbor-doctor, who checked in on Denise frequently; leather-lover Sergio, whom Cheryl affectionately called ‘Sir Joe’; Hal, who had been trying to ask Denise out forever, Erland, who ‘seemed’ to have a crush on Denise, but who was actually painstakingly keeping a secret related to the shooting, and of course, Denise’s daughter, the outspoken little girl with an old soul. I loved Cheryl!

Willa is such a malleable character and people-pleaser. “She was the only woman she knew whose prime objective was to be taken for granted”, she reflected. When her husband decided to accompany her to Baltimore “to make sure these people don’t take advantage of you,” instead voicing out her disagreement, she just went along with it. She always tried to see the best in people, even the husband, Peter, who is such an A**. A CHAUVINISTIC A**.

One might say she’s such a doormat or too obliging. But I think it takes a lot for and from a person to be so giving. What irates me though are the people who take advantage of people like her, in this case, her husband, Pete! And they keep taking and taking and taking!

The ending though,…I can’t say I neither liked nor hated it. I love open endings, but somehow felt this one a little abrupt and there were some loose ends that I thought shouldn’t be left hanging.

And there’s another part I didn’t quite get. I was hooked the moment Willa, 17 then, was threatened by a stranger in a plane. “This is a gun,” says the man sitting next to her. “And it’s loaded. Move and I shoot.” Her boyfriend Derek, doubted her story, which frustrated her at first, but decided to accept it. If it were me, I’d have call off the relationship, instead, she ended up marrying him. That kind of irked me.

And I expected the incident to have affected her take on life, but that was it. “It was the weirdest thing,” Willa tells her parents when they arrive at the airport. “The whole situation just seemed to get . . . swept under the rug.” Exactly how I felt. There weren’t any more mention of it after that chapter. If it weren’t going to affect her life, why write about it in the first place? I personally think the story would’ve been a little more interesting if more were drawn from this part.

If you’re already an Anne Tyler follower and have read this, I’d love to know your thoughts!

“If Willa were to invent a clock dance, it wouldn’t look like the one the girls had shown her. No, hers would feature a woman rain across the stage from left to right, all the while madly whirling so that the audience saw only a spinning of blur of color before she vanished into the wings, pouf! Just like that. Gone.”