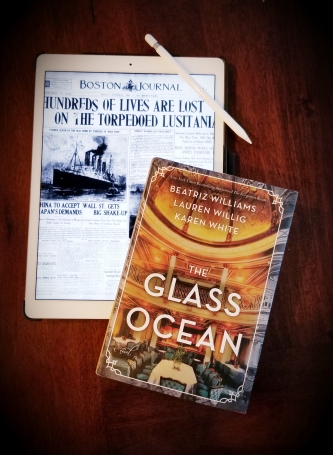 3 women – 2 in the past (Caroline, a Southern belle married to a wealthy industrialist; Tesse, a con-artist), 1 in the present (Sarah, a writer) , whose lives are interlinked by one big event – the tragic final voyage of the HMS Lusitania.

2013: Sarah was desperate for a big idea for her next book. Reluctantly, she broke her promise to her mom, opened a chest and discovered mysterious notes and belongings of her great-grandfather that might be related to the sunken HMS Lusitania.

1915: Caroline whose marriage to Gilbert was in crisis, couldn’t help falling in love with an old friend, Robert, who happened to be on the same ship too. In the midst of untangling her love triangle, she also discovered that this voyage her husband signed them up for, was more than just a vacation.

Tesse and her sister, Ginny, were on an assignment to pull off a heist, which Tesse found out later, was so important that it could affect the lives of everyone on the ship. The mission boiled down to Tease having to decide between life or death, fight or flight.

And while trying to unravel the mystery, the 3 ladies unexpectedly found love.

Romance is totally out of my comfort zone. The only reason I decided to dive into The Glass Ocean is the ‘historical mystery’ pull that sounded intriguing. But turned out, it had more romance in it; more than I could handle.

Storytelling was flawless, that’s for sure. These experienced authors know their stuff. Despite having to write separately, one for each character, the story flowed seamlessly, as though it was written by one person. The voices and personalities of the 3 female protagonists were easily distinguishable.

The romance part, for me, was a little bit cliche. Caroline, who was desperately trying to rekindle her love with her husband, Gilbert, also found herself falling for the man who had loved her for 10 years, the man who Tesse also unexpectedly fell head over heels for; and Sarah who, in the course of trying to write her next best seller, met her knight who saved the day. Except for the tragic ending, the love story was pretty much predictable.

The historical mystery I was expecting. The pull of the mystery was there – the authors did really well alternating between Sarah’s investigation and Caroline and Tesse’s own discoveries, while keeping the suspense at bay. But I somehow felt they allowed and devoted too much of the chapters to the love affairs. (Unlike The Summer Wives which I find, kept the balance of romance and suspense really well!)

The Glass Ocean probably isn’t my cup of tea. Many others liked it. I’m just not one of them. Here’s Jennifer’s positive review on the book. I hope you don’t mind the tag, Jennifer 🙂

Fun Fact: If my memory serves me well, the chest idea, was inspired by a chest the authors found in a mansion that was previously owned by one of the their husband’s family members (she mentioned it at the event I attended at the Decatur Book Festival). And the idea of this story came about when they were having drinks at a bar 🙂

“If you know someone you cared about was involved in something unsavory, what would you do?”

Have you read this yet? If yes, what did you think?

Till then, happy reading!