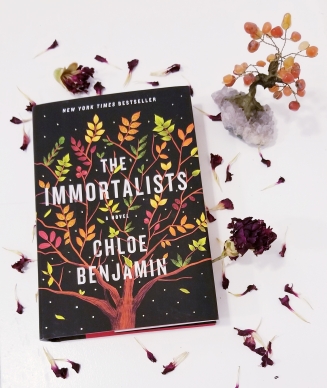 Title: The Immortalists by Chloe Benjamin

1969. New York. The works of a mysterious fortune-teller, had caused quite a stir among a few people in Clinton Street, and caught the attention of the Gold siblings, who were enthralled by the mysticism of it, and decided to seek her out.

After receiving their prophecies from the fortune-teller, the 4 siblings went on with their lives, each being haunted by what they were told. The novel was split into four sections – starting with Simon, the youngest, and ending with Varya, the eldest.

This novel is about so many things – family, faith, fate, magic vs reality, religion, love, loss and hope. This review won’t and can’t do it justice, but I’ll try.

I enjoyed this book immensely, for many reasons.

The storytelling was remarkable. The simplicity in the writing added depth, and made the story flow seamlessly, allowing me to enjoy it in its entirety. There was a lot of thought that went into it, leaving no words wasted, giving the story a consistent rhythm.

Although there weren’t any ‘carrot’ (my term for the ‘big pull/plot’) or suspense to take you through it, the novel is held strongly by the characters and their individual stories. Albeit the slow start, I was compelled to continue by these questions – What have the siblings been told? Why were they told separately? Why was Simon, only 7 then, so bothered by it? Now that they know their fates, how was it going to affect them? Or will it affect them at all? How were they going to live their lives?

Every character stood out to me – flawed, interesting, real, and most of all, thoroughly researched. I particularly liked Simon and Klara. Their personalities, chemistry and relationship spoke to me the most, Klara especially. She took risks, conquered her fears, doubts and critics. She decided “she won’t be the one who is sawed or tied in chains. She’ll be the saw.” Her unquenchable hunger to understand life, magic vs reality; and to achieve what others deemed ‘impossible’, drove her to accomplish her dreams. Varya and Daniel, on the other hand, being the older siblings, were bogged down by responsibilities and reality, hence they were more ‘rigid’ and obligated to live by the rules.

The author also created such a beautiful tight-knit family, who were bonded by their differences in personalities and their beliefs; their complicated relationships; their ambivalence attitude towards their mother who brought them up single-handedly, and their undeniable love for one another. And you can’t help but to want to be part of their journey, their world, their family.

This novel left me a lot to think about – one of the other many reasons why I loved it. It made me ponder – everything that happened to the Gold siblings, was it all their own doing, or was it destiny/fate as predicted by the fortune-teller?

Can science and research really help us live longer, or is it there to just give us hope; that by taking the recommended actions our lives can be prolonged?

All that said, I personally think this isn’t a book for everyone. I suggest you to read the prologue and first 2 or 3 chapters first. If they don’t intrigue you at all, maybe this just isn’t for you.

Last but not least

I want to leave you and myself with this to think about:

“In inventing God, we’ve developed the ability to consider our own straits—and we’ve equipped Him with the kind of handy loopholes that enable us to believe we only have so much control. The truth is that most people enjoy a certain level of impotence. But I think we do have control—so much that it scares us to death. As a species, God might be the greatest gift we’ve ever given ourselves. The gift of sanity.”