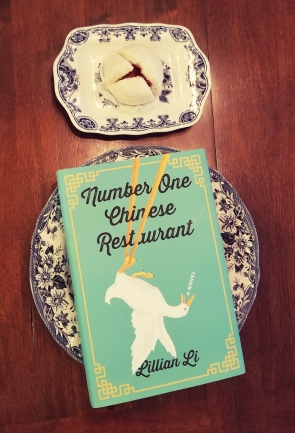 Title: Number One Chinese Restaurant: A Novel by Lillian Li

This novel centers around the hardworking Han Family who owns Beijing Duck House Chinese restaurant in Maryland, and the staff who have inhabited it for decades.

When Jimmy Han takes over the ownership of the restaurant from his late father and wishes to leave Duck House for a fancier one, chaos ensue, forcing each character out of their comfort zones, showing their true colors and face what’s ahead of them.

Expect family drama, complex characters and relationships, love, betrayals, sibling rivalries, and power struggles. This novel is what you’d get from a Chinese drama, featuring a wealthy business family. If only my mom loves reading as much as I do, I’d definitely recommend this to her!

Restaurant setting and delicious Chinese food aside, what I enjoyed most about this book are the dialogue, the dark humor and definitely the character portrayals. Li got under their skin and captured them so brilliantly.

Yes, indeed many of them aren’t likable. Namely Feng Fei, a conniving, deceitful matriarch of the Han Family, is not one who holds back her tongue, especially when demeaning her own sons, calling them names like ‘idiots’, and ‘barbarian’; Jimmy Han who would stop at nothing to achieve his ambition of owning his own restaurant; Uncle Pang the nine-fingered godfather of their family business, the necessary evil, and Janine, whom Jimmy labelled as ‘an ambitious little weasel’.

And it is easy to assume there’s hardly any love among the Han family members, just as Janine did. After witnessing a spiteful banter among them, Janine commented Jimmy’s family doesn’t seem to get along, to which he replied, “What’re you talking about? That was us getting along.” And their materialistic selves make them seem untrustworthy, always having their own selfish agenda. “Money makes people unpredictable.”  Johnny and Jimmy have their soft spots, but not Feng Fei, who’s hard as steel. But all that she does for her sons, was to me, a show of (very) tough love, not a popular ‘motherly’ choice in our eyes, but tough for sure.

But beneath all that hard and harsh exterior shown by these characters, there’s an inexplicable tight bond, love and loyalty. Li showed it subtly, but skillfully.

And the love triangle between Ah-Jack, his wife Michelle and Nan Fang, just warms the heart – the tenderness, understanding and unspoken sacrifices they showed and made for each other, just goes to show what true love is capable of.

So – Will Jimmy ever achieve his dream to finally own a fancy new restaurant? Will the Han Family ever get their problems resolved without having to seek the godfather’s help and owing him another favor? What’s to become of the love triangle between Ah-Jack, Michelle and Nan Fang?

If you want to catch a glimpse of our Chinese culture, relationships and families, do give Li’s debut a try! 🙂

A lesson I took away:

Hardships toughen, love softens. To achieve peace, we must find a balance.

Quotes for Food for Thought – Do you agree or disagree?

Fun Fact (I learned from the book):

To ease a burn on your skin (say from cooking and you need something within reach), wrap the affected area with a towel/paper towel soaked in soy sauce.

Have you read Number One Chinese Restaurant? What did you think of it? If you haven’t read it, is it in your TBR or do you intend to read it?