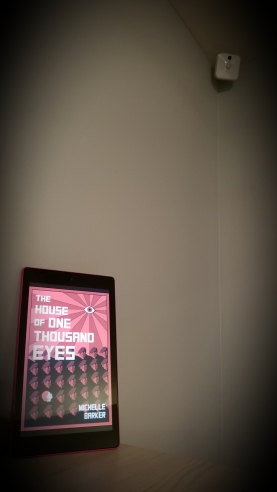 Title: The House of One Thousand Eyes by Michelle Barker

Life in East Germany in the early 1980s is not easy for most people, but for Lena, it’s particularly hard. After the death of her parents in a factory explosion and time spent in a psychiatric hospital recovering from the trauma, she is sent to live with her stern aunt, a devoted member of the ruling Communist Party. Visits with her beloved Uncle Erich, a best-selling author, are her only respite.

WARNING: This is an unpopular opinion, so please bear with me.

It started off slow, then picked up when her uncle, Erich, went missing. The suspense was there but I personally think it went on for too long. The pace kind of plateued after awhile.

That said, I still much preferred the plot to the character development. Lena’s character was the most well polished. I liked her sense of humor and sarcasm. She’s the sole reason (besides trying to find out what happened to her uncle) I went on with the story.

I also liked Lena’s relationship with her colleague, Jutta, whom I thought was a better person that her aunt. On the other hand, her relationship with Max, her boyfriend, was a little hard to get into. I just thought that relationship didn’t really gel well with the entire story, and fell a little flat.

It would’ve been a more compelling read if her uncle were given his part of the story too – how he was being treated and what he was going through. Just knowing Lena’s side of the story didn’t quite create the sense of urgency that I was expecting when she was trying to find ways to save her uncle.

Nevertheless, this is still a pretty decent read for a debut. And I learned a lot by reading the Afterword in which the author shared some eye-opening and shocking insights about The Stasi. Such as:

“In the 1980’s, the Stasi’s (secret police agency of the German Democratic Republic – East Germany) preferred strategy for dealing with opponents to the regime was called Zersetzen. It involved frightening dissidents into silence by, for example, spreading humiliating rumors about them or conspicuously following them.” They also employed more aggressive methods such as murder of prominent political enemies of the regime.

TRIGGER WARNING: Sexual abuse (May be uncomfortable to some. It was to me)

Thank you NetGalley for providing a free digital copy of this book in exchange for an honest review.

Have you read this book? What did you think of it?