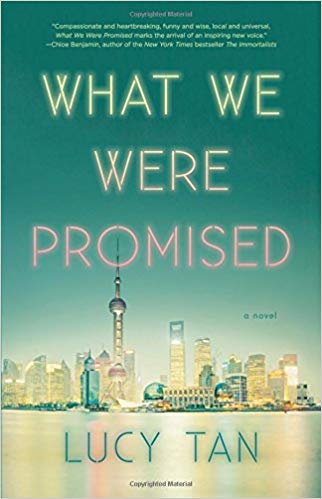 Title: What We Were Promised

After years of chasing the American dream, the Zhen family – Wei, Lina and their daughter Karen, returned to China and joined an elite community of Chinese-born, Western-educated professionals.

Be warned. This is an UNPOPULAR OPINION.

I tried my best to like it, to appreciate it in every sense of the word, but I just can’t. Maybe I’m not the audience for it. This review is, as always, my personal opinion.

What I liked and appreciated:

It was an interesting story which had really good themes – family, love, wealth, social status, friendships, and a brief look into our Chinese culture, food, traditions and beliefs. It started off strong with a great opening – hooked me right in with the case of Lina’s stolen bracelet.

I loved Tan’s beautiful, poetic analogies – definitely her strength. One that I liked,

“…when a stranger’s eyes landed on her, she knew that to this person, she could be anyone – and the possibilities excited her. If she often felt lonely around strangers, she also sometimes thought that her “self” – that unformed possibility – might be the best company she’d ever had.”

I loved that for the simple fact that she weaved words that beautifully expressed what and how Sunny felt among strangers.

Another one was an intimate moment between Lina and Qiang.

“A lifetime passed. No time passed at all. The minutes bloomed like a flower, closed back up into a fist. She knew then that it was love, because what else could have such a multiplying effect?”

Her ability to write from different POVs, giving us different perspective of people of different classes and circumstances, is also one of the story’s plus points. It was through their eyes, I saw how differently they viewed each other, especially in terms of wealth, love and happiness.

Somehow I felt the characters were always at arm’s length – not compelling enough for me to empathize with any of them. They were neither likable nor unlikeable. One character that stood out to me though, albeit appearing only for a short time, was Little Cao, the Zhen’s driver. He definitely made an impression!

It started strong, then it kinda ‘fizzled out’…If you’re expecting a huge ‘event’ (the main pull which I call the ‘carrot’) to unfold, you’d be slightly disappointed. I guess the author intended the ‘carrot’ to be the love affair between Qiang and Lina, but it just wasn’t tempting enough. I think maybe because the carrot was hung there for too long and I lost interest. The ending and Lina’s resolution, all seemed too ‘sudden’ and abrupt.

There were some parts which I felt, were a little longer than it should be, such as Lina and Quang’s background stories, and the Expo.

The tone throughout the story was rather serious and melancholic.

That being said, this being Tan’s debut novel, is a promising one. I’ll be looking out for her future works.

My family’s tradition/culture/beliefs that we commonly practice: