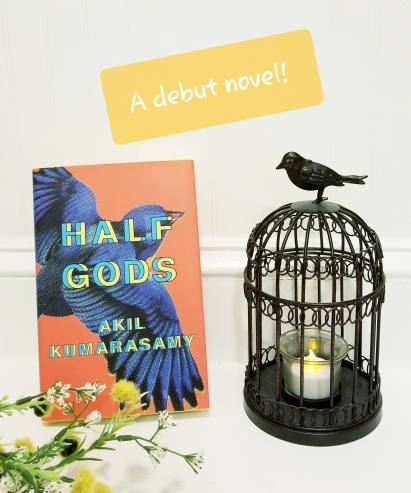 Title: Half Gods by Akil Kumarasamy

These are stories of people affected by The Sri Lanka Civil War in 1983 that lasted for 26 years. Lives bruised, blemished and battered by the Sri Lankan war, and hoping to flee and forgetting their painful past, they moved to America to rebuild their lives. Their attempt to do so only made their past clung harder to them, taunting and haunting them and the generations after, who ached to know their past, their history, that seemed so far and unreachable.

I love debut novels. So I was really looking forward to reading this, just like I was with What We Were Promised. But, tried as I might to like Half Gods, I just couldn’t, and it made me feel really terrible! Maybe I’m just not the target audience. Many others did enjoy Half Gods. So, that’s a great start for the author! 🙂

Let me first get to the good stuff.

The prose throughout was poetic, almost lyrical. It was definitely the book’s saving grace.  One of my favorite passages:

“For the new world, we must all transform, shed our skin and rename everything. The flowers were stripped, the trees slanted with torn limbs, and we needed to make sense of it while the water shriveled us into old women and plowed through the land to bring new life.”

Of the 10 stories, there were some which I liked – those of the brothers, Arjun and Karna (the ones that appear and reappear more frequently in the stories than the rest) who were as different as night and day (Shade and Brown Smurf), their book-loving grandfather, Muthu (A Story of Happiness), and their mother, Nalini, a quiet yet determined individual (When We Were Young).

All the interlinked stories were almost so ‘brief’ that it was so hard to get into the characters and empathize with them. Just imagine ‘floating by’ on a boat on an idyllic sightseeing tour with a guide narrating the stories. There was just no impact. No hit-in-the-gut moment.

If you plan to read this, I suggest you read the stories in sequence or it can get very confusing. I resorted to taking notes to keep track of the characters, their relationship to each other and their backgrounds, and it really helped.

This book would have been such a great read if:

* The beautiful writing didn’t take over the story, leaving not much space for the characters to develop and tell their stories.

* It didn’t try to bring in too many subjects at once – the Sri Lankan war and famine, survival, refugees, religion, poverty, faiths, love, loss and family. There was just no main subject/focus.

Some quotes that I liked:

“Why do a few sad events have to make a whole life unhappy?”

Would I recommend this? Only if you’re curious to know if it lived up to its hype, and don’t mind investing some of your time trying something different.